How Sac State is supporting degree-completion 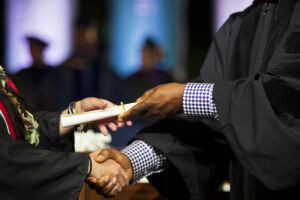 By 2025, projections show that 65 percent of jobs will require that employees have some type of post-secondary education. (Sacramento State file)

You’ve put in the hard work. Finished all of your classes. But you never formally applied for graduation. Or maybe you have an outstanding parking ticket or overdue library book. In any case, you don’t have your degree.

Estimates indicate that’s the reality for more than 700,000 Californians – 55,000 in the Sacramento region alone – who are eligible for a bachelors or associates degree, save for an administrative roadblock. Over the next two years, Sacramento State will lead a statewide group of colleges and universities in an effort to get these students across the finish line – boosting their careers and the economy in the process. The group also includes local community colleges, which will join the University in tackling degree-attainment issues specific to the capital region.

The project, called Degrees When Due, is led nationally by the Institute for Higher Education Policy (IHEP) and is aligned with ProjectAttain!, a regional initiative bringing together partners in higher education, workforce development, community development and economic development. The goal is to increase educational attainment – the number of working-age adults with a college degree, certificate, credential or diploma – to 60 percent by 2025 in the Sacramento region.

Sacramento State is the ideal campus to lead the cohort, said Barbara Halsey, ProjectAttain! coordinator. The reason, in large part, is because Continuing Education Dean Jenni Murphy has made educational attainment her top priority.

“She understands the needs of the adult learner population,” Halsey said. “She understands that it’s not a uniquely Sac State issue, and by working across institutions, the results we can get for Californians across the state has a multiplier effect.”

Over the course of the project, the group will dive deeply into institutional data to learn why eligible students are “stopping out” – failing to formally apply, or needing one last class, for example – and determine the best ways to reach out to those students and help them receive their degrees.

The first Degrees When Due cohort, which included Shasta College and College of the Siskiyous, has already seen success, with Shasta discovering and reaching out to nearly 300 students who were either eligible for degrees or one requirement short since the project began a year ago, according to college officials.

Experts predict that 65 percent of jobs will require some type of post-secondary education by 2025, Halsey said. Degrees When Due provides participating institutions with an opportunity to assess how their practices might have impeded educational attainment, make amends, and demonstrate continued commitment to overall student success.