Sierra College President Willy Duncan has used a combination of ambitiousness and pragmatism to help keep his school’s 18,000 students on track with their studies amid a pandemic that upended teaching protocol everywhere. 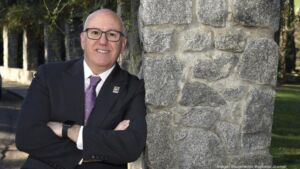 “We were one of the first colleges in the country to move to a remote environment. That allowed us to get ahead of the curve,” said Duncan. “But we never quite hit all of the classes. You can’t learn to weld online.”

Since joining Sierra College as its president in 2011, the 54-year-old Duncan took a scientific approach from the start to best guide students through the maze of classes required to reach their goals, whether they be completing two-year degrees at Sierra College or moving on to four-year institutions such as UC Davis, Sacramento State or Chico State.

“Education can be a space that values stasis over change, and there was a lot that we felt Sierra College could do more effectively to serve the public if we were willing to get out of our comfort zone,” said Aaron Klein, CEO of Auburn-based Riskalyze, who was Sierra College’s board president when it tapped Duncan. “Willy just really stood out from the crowd by having the willingness to challenge the status quo and push for data-driven change. It’s really shown itself in the work he’s done to create defined pathways through the college system.”

Overseeing a $100 million annual budget and about 1,300 employees, Duncan helped Sierra College boost its percentage of classes offered online from about 25% prior to the pandemic to as much as 85% during some of the surges. While Duncan allowed that moving remotely has hindered his ability to connect personally to workers, the boost in remote classes has given students — many of whom are also working — more flexibility to manage their course loads.

Duncan, who was born and raised in Bakersfield, is also working on modernizing the 62-year-old campus, which received funding from a bond Placer County passed in 2018. Some of the investments include a 70,000-square-foot instructional building that broke ground last year and is scheduled for completion in late 2023, and a 60,000-square-foot science building that will break ground next year and will double the number of science laboratories on campus.

Klein added that before California approved waiving non-resident fees for veterans who’d served out of state or out of the country, Duncan was a valuable advocate for allowing veterans to qualify for in-state tuition at community colleges. Duncan also serves on the Sacramento-based nonprofit Valley Vision board as part of a broader effort to get adults who’ve halted their studies to return to college and complete their degrees.

“I do spend a lot of time in the community,” Duncan said. “I’m about to hit my 10-year anniversary (at Sierra College). It’s caused me to reflect a little bit.”