Dave Roughton may be retiring from his role as CEO and president of SAFE Credit Union, but his investment in the organization — and its impact on Sacramento — hasn’t wavered. 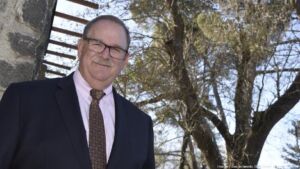 Through leadership positions on the Greater Sacramento Economic Council, the California Credit Union League, and the Sacramento Metropolitan Chamber of Commerce, Roughton has been an influential voice in the region’s economic vitality, helping businesses navigate through pandemic-related struggles.

“In order for SAFE to be a strong and healthy organization, we need strong and healthy communities,” Roughton said of the reciprocal relationship between investing in Sacramento and in turn SAFE members — 51% of them low-income families — financially benefiting.

Roughton’s vision for community integration and fostering SAFE’s internal growth came to life over his 23-year career at the not-for-profit cooperative, first as chief financial officer, and then the past six years as CEO.

The growth continued, with a 17% increase in assets last year, despite many adjustments Roughton made to ease the burden from his members who were unable to pay their bills due to Covid-19 hardships.

Over the past two years, Roughton allowed members to pass on more than 20,000 loan payments, worth $270 million. The organization also funded 762 Paycheck Protection Program loans and gave out more than 2,000 emergency loans that were zero percent interest. The PPP was the federal government’s main initiative to help small businesses that were disrupted by the pandemic.

He also eliminated overdraft fees and ensured that each federal stimulus check went through, regardless of the status of a member’s bank account.

Internally, he increased the paid time employees could volunteer for various nonprofits, and moved forward with his financial education programs throughout the city. This included one of his longest standing partnerships with First Tee of Sacramento, an organization that teaches thousands of local elementary kids life skills through the game of golf.

“I didn’t want the pandemic to be an excuse to limit our investment in the community,” he said of the 5,000 volunteer hours SAFE employees clocked in, and of the $400,000 a year the organization donates to the community through grants and scholarships.

His efforts paid off: Not only have member ratings never been higher, he said, SAFE was chosen as one of Sacramento Business Journal’s Best Places to Work for four years in a row.

Over the past year, Roughton has prioritized the organization’s dialogue around inclusion, diversity and equity, creating opportunities for minority employees to connect and foster career goals.

Roughton’s most recent and visible accomplishment, which he admits is a proud legacy to leave behind, was securing a $23 million, 25-year partnership with the city of Sacramento through the renovated Sacramento Convention Center and Community Center Theater in Downtown Sacramento. The space, now called the SAFE Credit Union Convention Center and the SAFE Credit Union Performing Arts Center, has brought thousands of visitors into the area, filling restaurants, shops and hotels.

“It’s so much more than the naming rights,” Roughton said. “The city of Sacramento invests in SAFE so that we can reinvest those dollars into small business and into the city.”

In his last year, as Roughton transitions Faye Nabhani, chief credit officer, into his role, the organization is launching a complete technology revamp of its systems.

The project was put on hold in 2020 because of Covid demands on the workforce, but is now set to launch in April.

“It’s the largest investment in tech we’ve ever made,” Roughton said. “It will have an impact on what gets delivered on members’ phones, what they see in our branches, on their ATMs. It’s really transformational.”